20% Of Energy Costs Are To Condition Air

The average food service kitchen exchanges inside air for fresh outside air at least 20 times per hour. It sounds like an effective way to keep a kitchen comfortable and safe, but in most situations it is actually a huge drain on energy resources that provides no real health benefits to employees or guests. Roughly 25% of a food service operations energy costs go to conditioning the outside air brought in during these air exchanges, and according to estimates from the American Gas Association, the U.S. food service industry wastes more than $2 billion each year because of excessive ventilation.

Technology is typically the culprit. Until a few years ago, most kitchen ventilation controls consisted of a manual on/off switch and a magnetic relay or motor starter for each fan. Exhaust and make up fans either operated at 100% speed or not at all, and the whir of the exhaust fan was a common sound in the average commercial kitchen – even when cooking equipment was not in use. Manual two speed systems that relied on cools to switch from low to high speed and vice versa offered some energy savings but were seldom used efficiently.

The TEL kitchen control system has changed all that. With microprocessor based controls whose sensors automatically regulate fan speed based on cooking load, time of day and hood temperature while minimising energy usage. The TEL system includes a temperature sensor installed in the hood exhaust collar, IP sensors on the ends of the hood that detect the presence of smoke or cooking effluent and variable frequency drives (VFD) that control the speed of the fans.

If you’re not using a variable volume hood it is always at maximum design volume when running. The TEL Kitchen control system detects both smoke and temperature rise, increasing the volume when it is needed. Most kitchen hoods require full exhaust performance for only a small percentage of the day. Varying the speed of the fan as the cooking loads change will save money by reducing ventilation needs. 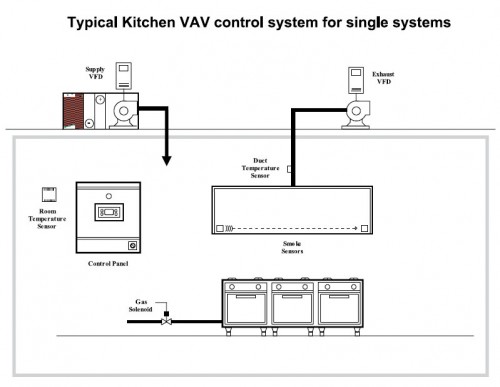 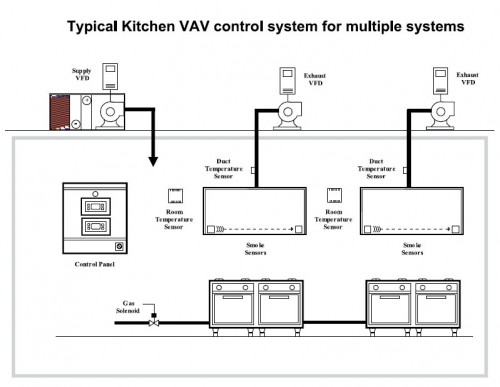 Gas Interlocking
Cutting off the gas flow in the event of kitchen ventilation failure is now a mandatory requirement in most commercial kitchens in the UK:-