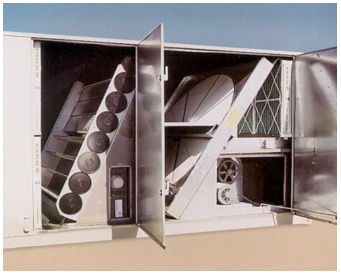 Since the modern era of energy conservation began in the mid 1970s, the vast majority of the dollars spent have gone towards lighting and high-efficiency motors. That is because those technologies are easy to understand, the savings are predictable and simple to calculate, and the payback period is short, typically in the range of 1-5 years.

By comparison, the amount of money spent on high-efficiency heating, ventilating, and air conditioning (HVAC) systems has been small. That is because the existing energy use and savings of HVAC systems are difficult to predict, the number of viable HVAC-related energy conservation technologies has been small, and the existence of these technologies is not widely known. That is unfortunate because some of these technologies are exceptional and provide among the most rapid paybacks in all of energy conservation.

One HVAC technology that has proven to be particularly cost-effective and reliable is the energy recovery ventilator (ERV). When added to new HVAC systems, or retrofitted to existing ones, ERVs greatly reduce the amount of energy required to condition outdoor air being brought into a building. This was demonstrated in a 2002 U.S. Department of Energy study that concluded that ERVs, if applied nationwide, could save over 15% of commercial HVAC system energy use.

The central component of the ERV is the air-to-air heat exchanger that transfers energy from air being exhausted from a building to outside air being brought in. While there are a number of different types of air-to-air heat exchangers being used in ERVs, the most common is the rotary exchanger, which is also referred to as a heat wheel, enthalpy wheel, or energy recovery wheel.

Energy being lost through exhaust air is recaptured and transferred to outside air being brought into a building, thereby reducing energy use.

The importance of the enthalpy wheel in the ERV is best explained by Donald Steele, the founder and president of Rockland, MA-based Airxchange, a leading manufacturer of these wheels. “Outside air can account for 15-50% of the total load on an HVAC system. Traditionally, that load has been addressed by the HVAC unit, which may have an energy efficient rating (EER) of about 10. By comparison, an enthalpy wheel can have an EER of up to 100, so it is a far more efficient way of addressing the outside air load.”

If the goal were simply to reduce energy usage, it might be far more sensible to just reduce the quantity of outside air than to resort to a mechanical device. Numerous studies, however, have shown that more than half of all the illnesses we suffer, including cancer, coronary diseases, and respiratory diseases, are caused by indoor pollutants. Furthermore, those problems have been exacerbated by modern construction practices that have minimized natural ventilation. The introduction of outside air reduces the concentration of contaminants while minimizing the transmission of airborne viruses and bacteria and providing a more comfortable and productive work environment.

Enthalpy wheels were in use long before Airxchange came into existence. Airxchange, however, updated the technology with a modern structural design that includes a segmented washable wheel made of lightweight polymer materials in a corrosion-resistant stainless steel housing. This resulted in improved maintainability, greater reliability, and an expanded range of applications. As a result of these advancements, energy recovery ventilation has become a mainstream technology.

The impact of enthalpy wheels on system performance is immense. During the summer months, energy extracted from exhaust air is transferred to outdoor air entering the wheel from the opposite direction. The outdoor air exits the wheel considerably cooler and less humid. 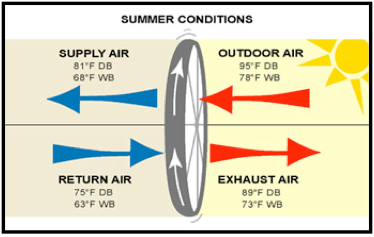 During the winter months, energy extracted from exhaust air is again transferred to outdoor air. As a result, the outside air exits the wheel considerably warmer and more humid. 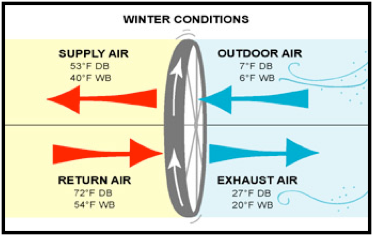 Impact of Enthalpy Wheel on Load

The enthalpy wheel impacts energy use by reducing the outside air component of the load on the HVAC system. By recapturing roughly 70% of the energy from the exhaust air under peak ambient conditions, the outside air load is reduced by this same amount and the size of the HVAC system can be reduced accordingly. In fact, the HVAC system should be reduced by this amount to prevent short cycling that would inhibit its ability to properly dehumidify the space during humid periods.

The addition of an enthalpy wheel to an HVAC system can reduced the outdoor air component of the peak load to the point where a smaller HVAC unit can be confidently used. In fact, this may be advisable since an oversized HVAC unit can short cycle, thereby reducing its dehumidification capability.

Impact of Enthalpy Wheel on Energy Use

The addition of an enthalpy wheel to an HVAC system, and the corresponding decrease in the HVAC unit tonnage, can have a profound impact on peak electrical demand and energy usage, both during the cooling and heating seasons. Because the HVAC unit can be downsized by roughly 25% (the exact amount depends on the percentage of outside air and the local climate), the connected electrical load will be reduced by a similar amount. This savings will continue over the entire cooling season, albeit in lesser amounts as the ambient temperatures become more moderate. Then, during the cooler weather when heating is called for, heating energy will be saved.